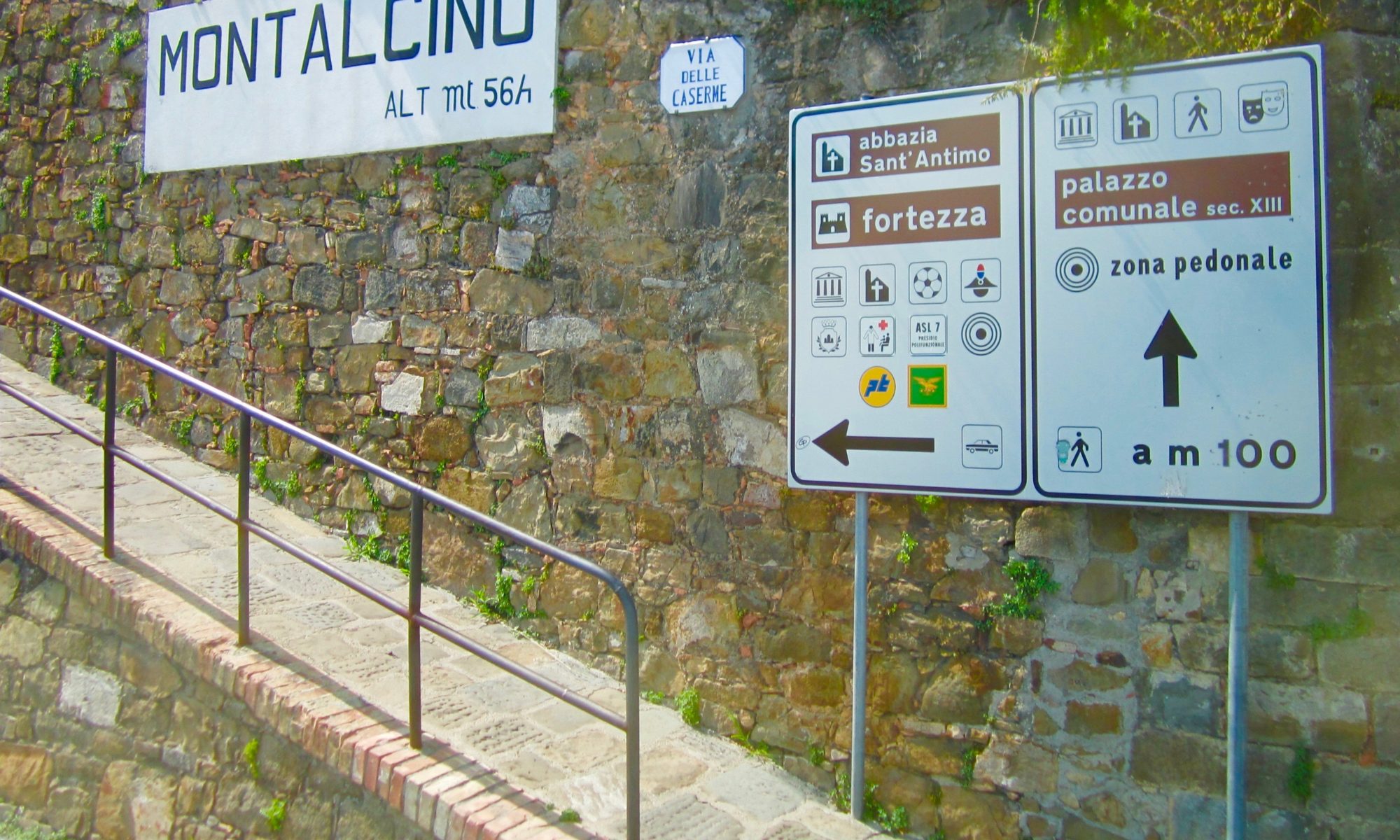 The commune is made up of four urban centers: Montalcino, San Angelo in Colle, Castelnuovo dell’Abate and Torrenieri. The top producers in the Montalcino area have vineyards on both slopes, and produce a blend of both styles 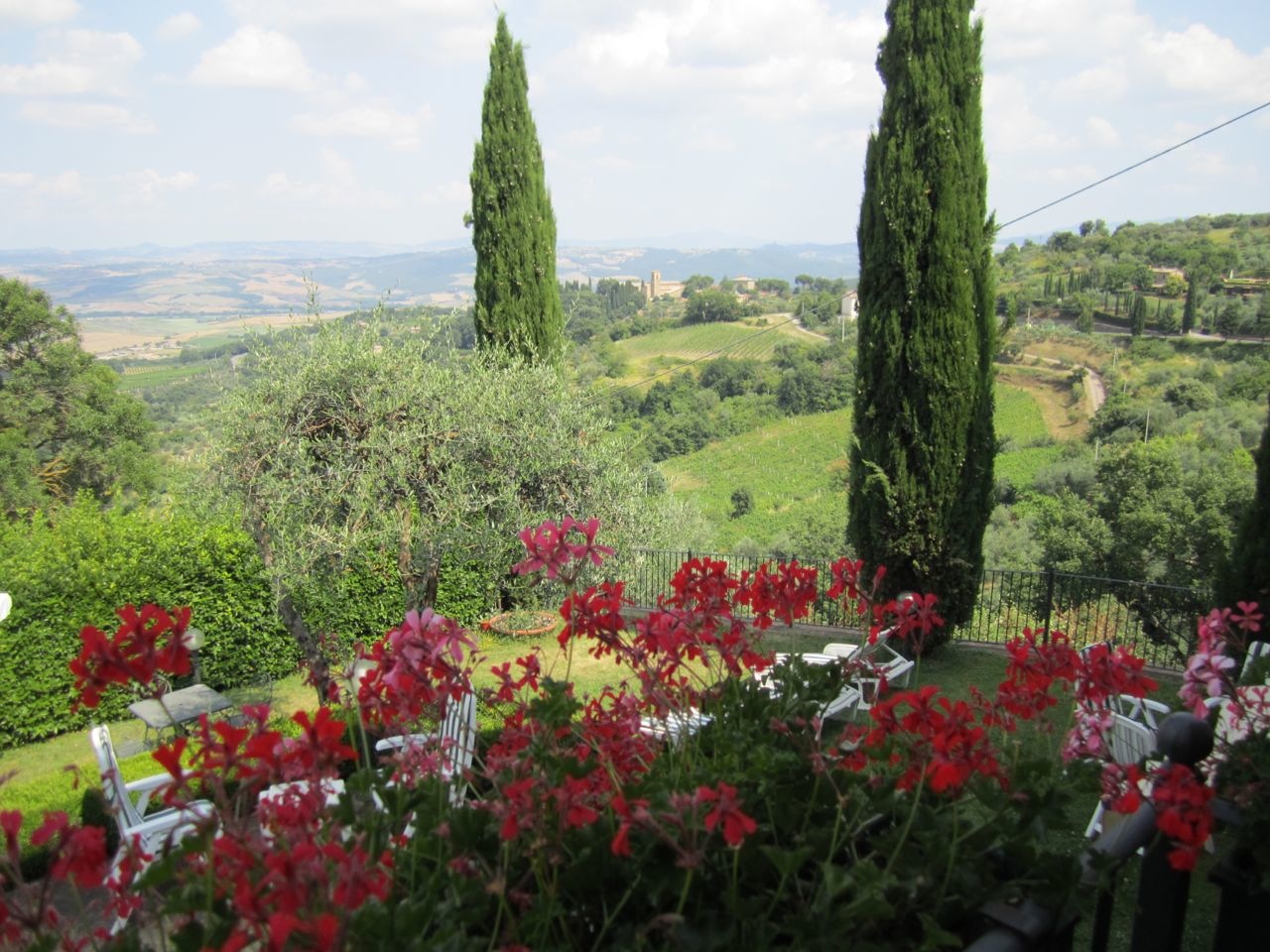 In 1831, the Marchese Cosimo Ridolfi, praised the red wines produced in Montalcino, and Brunello records, date back to the 14th century. But it wasn’t until 1865 that Brunello took the spotlight, when it was the “select red wine” and prize winner at the Montalcino’s agricultural fair. Around this time, Clemente Santi isolated certain plantings of Sangiovese with the intent of producing an age worthy wine, and in 1898, his grandson Ferruccio Biondi-Santi, released the first version of Brunello as we know it today, after having aged the wine in large wood barrels for ten years. It was the 1888 vintage, followed by the 1891, 1925 and 1945. By the time we reached the 60’s there were less than a dozen producers of Brunello and in 1968 the DOCG status was awarded to the area. 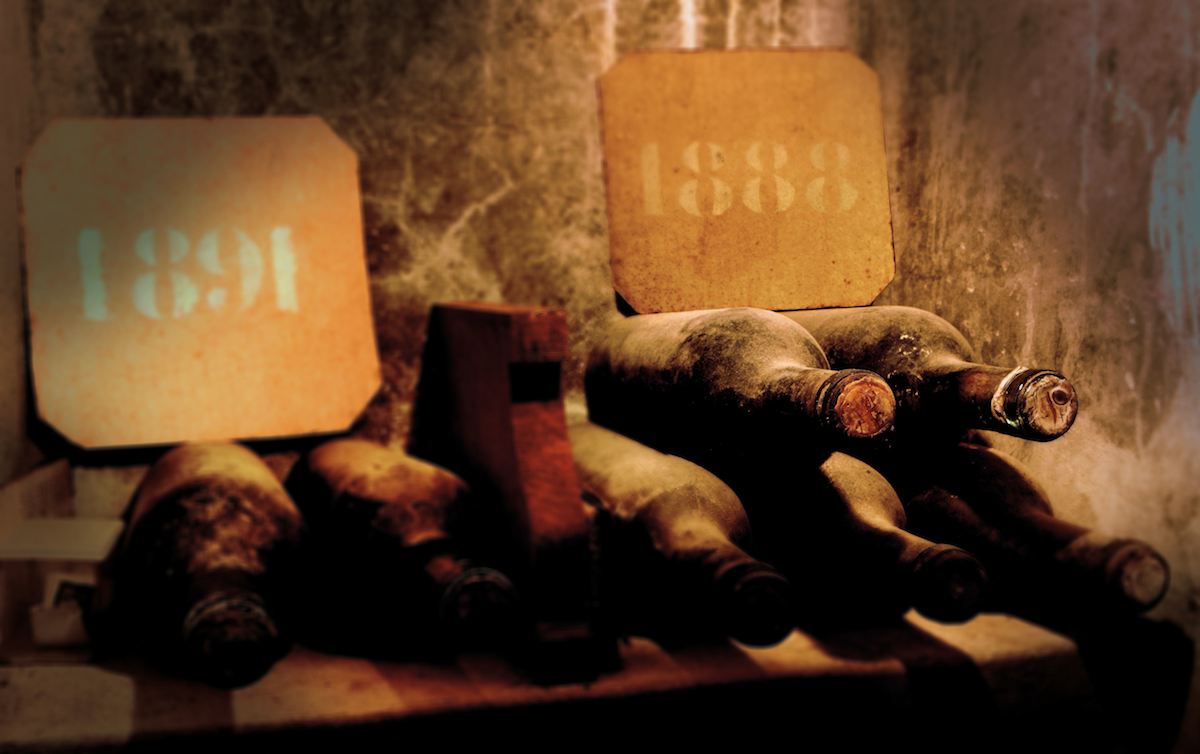 Montalcino  is only 10 miles in diameter and the variations in altitude and soil composition, vary throughout its sub-regions.

Montalcino has the warmest and driest climate in Tuscany, with its grapes ripening up to a week earlier than the Vino Nobile di Montepulciano and the Chianti Classico. Montalcino climate is the most arid Tuscan DOCG, with an average annual rainfall of around 700 mm, in contrast to the Chianti region averaging 900 mm. 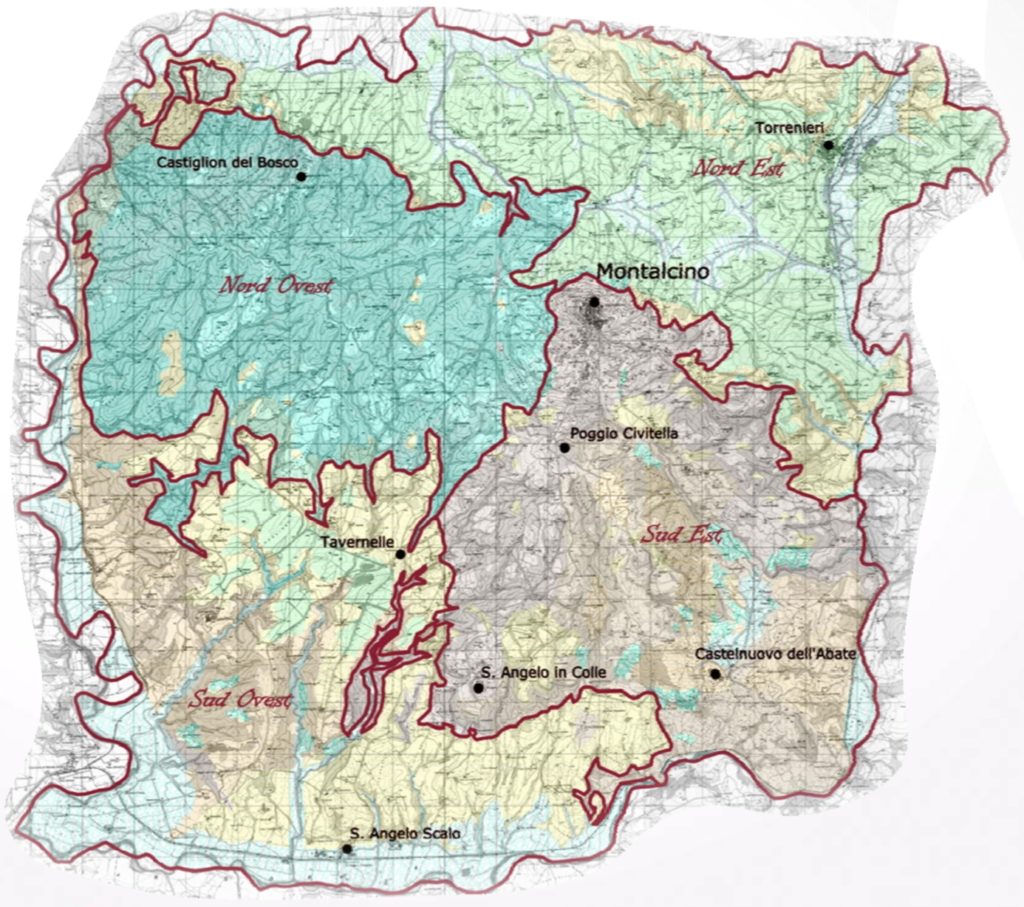 The Northeast by the town of Torrenieri, has heavy clay soils not conducive to growing the finest fruit, but good quality fruit can be grown on hillsides with good drainage.

The Northwest is heavily forested with cool temperatures at risk of spring frosts and fungal diseases; it has clay, sandstone and schist soils. Yet Silvio Nardi with a winery established in the 50’s and Castiglion del Bosco, that has spared no expense to produce high quality wines aged in French barriques.

Central Montalcino is home to the majority of Brunello’s producers, including most of Brunello’s original vineyards and many of its famous estates, including Biondi Santi, Costanti, Fattoria dei Barbi, and Valdicava. Average altitudes are the highest of the appellation. Poggio Antico, located just south of the town, has one of the highest vineyards at 480 m, although most estates have vineyards at varying altitudes. Soils north and south of the town are varied with sandstone, shale, lime- stone, marl and galestro being most common. Costanti’s vineyards just east of the city has a high percentage of marl (a mix of clay and calcareous rock) at higher elevations, but as one moves downhill sand and clay take over.

The high altitude and low temperatures lead to slow ripening that producing phenolic ripeness in all but the coolest vintages (e.g., 2002) and avoids over-ripeness in all but the hottest vintages (e.g., 2003). The cool climate and high diurnal temperature variations help the fruit retain acidity. As a result, this sub-region produces Brunellos that are especially long-lived and elegant.
Altitudes decline as one goes north in the direction of Buonconvento, and superb Brunellos are made in the north by wineries like Capanna, Caparzo and Donatella Cinelli Colombini. Of special significance are the Altesino and Le Gode north facing vineyards on Montosoli, a 450 m, marl and clay hill north of Montalcino.

The Southeast around Castelnuovo dell’Abate, has proved to be an excellent location for growing Sangiovese. Several traditional wineries in the Montalcino sub-region have purchased vineyards here, mostly in the vicinity of the 12th century Abbey of Sant’Antimo. Temperatures are warmer than Central Montalcino, evening breezes make their way up the Orcia River valley from the sea to provide goad diurnal variation, allowing the fruit to retain acidity and freshness. Vineyards have varying mixes of marl, shale, sandstone and clay soils and are planted at relatively high altitudes (up to 450 m), although some are as low as 150 m. Mastrojanni, Ciacci Piccolomini d’Aragona, and Uccelliera are some of the best known wineries of this area.

The Southwest a few kilometers from the town, in Tavernelle, there are vineyards of relatively high altitude with good soils of lime- stone, clay and sand. Daytime temperatures are warm but cool rapidly in the evening, providing the diurnal variation required for good acidity and freshness. Angelo Gaja’s Pieve Santa Restituta is located here. Proceeding further to the southwest, one finds higher average temperatures, less rainfall, and a more varied set of vineyards in Camigliano and Sant’ Angelo in Colle. The soils range fram sand and clay near the river in Sant’Angelo Scala to calcareous soils at higher elevations. The producers here include the largest of the appellation: Banfi, Frescobaldi’s Castel Giocondo, Col d’ Orcia, and II Poggione. Each of these producers has vineyards of varying altitudes (150 – 400 m) and soils. Banfi has identified 27 different soil types on its estate alone. The warmer temperatures and faster ripening of this area can in some vintages produce wines with lower acidity and higher alcohol than the wines of central Montalcino. In cool vintages with autumn rains like 2002 the warmth and early harvesting of this sub-region allow it to still produce good quality wines, while fruit can dessiccate and wines can suffer in especially hot years. Compared to the wines of Central Montalcino, wines from this region are generally regarded as more accessible early on. 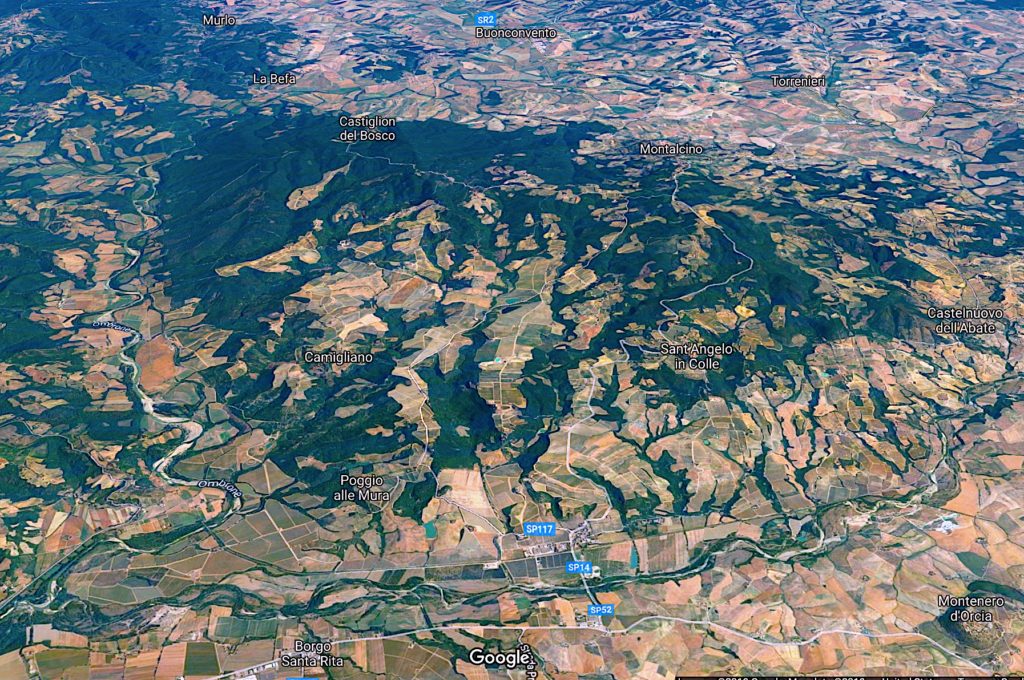